Nonprofit hospitals could reap credit for improving the eating habits of their patients and communities.

As they strive to prove they are benefiting communities under the Affordable Care Act, nonprofit hospitals may become the latest battleground between fast-food purveyors and advocates of healthy—and preferably locally produced—cuisine.

“I am looking for opportunities for you to be the doctors to the world,” said Marydale DeBor, a former Connecticut hospital executive, at the convention for the National Farmers Union last month in Springfield, Mass.

Hospitals have long been a culinary joke, serving unappetizing food of questionable nutritional value to patients while selling fast food that is even more questionable in their cafeterias. Medical-school critics have chastised physicians for prescribing to patients costly drugs to deal with the effects of diseases that arise from bad diets and lack of exercise rather than feeding them healthy food and teaching them to eat better when they leave the hospital. 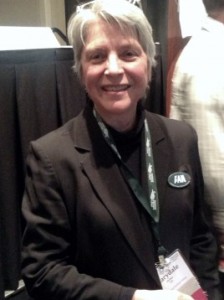 But a new generation of doctors and hospital administrators is changing that. DeBor, a lawyer, previously served as vice president of external relations at New Milford Hospital in Connecticut, where she oversaw the overhaul of the hospital’s food system, emphasizing the quality and origin of the food. DeBor now works through her New Haven-based consulting firm, Fresh Advantage, to tell farmers who produce healthier food that they should lead a movement toward more-nutritious hospital eating—and reap the benefits.

She also told the farmers that the changing requirements for hospitals under “Obamacare” will expand their opportunity to improve food quality in medical institutions. To maintain their nonprofit status, hospitals have long had to prove to the Internal Revenue Service that they provide community benefits, and they have often gotten credit for providing care to people who couldn’t pay. But with almost everyone required to have insurance under Obamacare, hospitals will be looking for new ways to provide community services. One way to do that is to provide healthier food to patients and to teach patients and the community at large to eat better, she said.

DeBor, who now serves on the board of the New England Farmers Union and was a delegate to the convention, urged the farmers to develop “direct relationships” with the officials in charge of community benefits at their local hospitals.

“Farmers really need to be advocates in a time of opportunity,” DeBor said. “Talk about hospitals and what they are doing right now. It is a time of new ideas.”

That message had a natural appeal to small-scale farmers, particularly those who live near large urban centers, but DeBor told the Midwestern-dominated Farmers Union that the most important part of the message is that hospital food should be healthy. Farmers in low-population states need not fear the movement, because farms near urban areas can’t possibly supply all the food for big cities and suburbs. Nebraska Farmers Union President John Hansen, who was in the audience of DeBor’s speech, said farmers in rural states should also become active in the “buy local” movement, because he has learned that restaurants and institutions in Nebraska often buy steaks and other meats from “five or six states away.”

The movement is not without complications, however. At New Milford, the hospital’s food vendor refused to go along with the new ideas on purchasing and food preparation and had to be replaced.

Another issue is affordability of the fruits, vegetables, and other high-quality foods that many doctors and nutritionists now recommend when people leave hospitals. Wholesome Wave, a Connecticut-based group, raises money from foundations, government agencies, corporations, and hospitals to help low-income people in 28 states and the District of Columbia buy fruits and vegetables from farmers markets and local producers, but its organizers acknowledge the need is great.

Scott McFarland, the Cleveland Clinic’s former president of wellness, had a mandate to make wellness part of the clinic’s brand. He said in an interview that he got pushback when he limited fat and sodium in hospital menus, removed all drinks with high-fructose corn syrup from the vending machines, pulled deep-fryers out of the kitchen, and banned “all the bad items” that people should not be tempted by “when they are in the bubble of the Cleveland Clinic.”

Food-safety requirements make it difficult for small farmers to sell to hospitals, noted McFarland, who now lives on the Hawaiian island of Kauai, where he and his partner run an athletic club and have a 16-acre farm that grows avocados, figs, citrus, and bananas that they sell to local restaurants and hotels. McFarland said that institutional buying requirements are so strict in Hawaii that he has not been able to sell to hospitals there, but he believes farm groups and the food-hub system established by Agriculture Deputy Secretary Kathleen Merrigan to help small farmers meet the food-safety requirements of institutions will help.

McFarland grew up on an Indiana corn and beef farm and was once a lawyer for the National Corn Growers Association. Today, he is the vice president of the Hawaii Farm Bureau, and said the combination of younger doctors’ views and government pressure on doctors and hospitals to “keep patients out of the hospital rather than put heads in the beds” make it a smart move for farmers to grow what the hospitals want to buy.

“Over the next decade,” he said, “you are going to see Americans eat healthier, and that is going to have an impact for farmers.”

[box style=”grey rounded” ]Contributing Editor Jerry Hagstrom is the founder and executive director of The Hagstrom Report, which may be found at www.HagstromReport.com.  This article appeared in the Thursday, April 4, 2013 edition of National Journal Daily.[/box]

Marydale Debor is the founder of Fresh Advantage LLC which she created after 25 years experience in health care administration and philanthropy, when she recognized the urgent need to revolutionize traditional institutional food service. Her goal is to place nutritious, wholesome, and tasty food at the center of medical care and disease prevention, as well as workplace wellness and health promotion.


Plow to Plate
Before Fresh Advantage, Marydale co-founded Plow to Plate. Hear about their successes on All Things Connecticut